To go to my current blog themommylane.blogspot.com follow the link. Thanks!
Posted by Gretchen at 10:53 AM 4 comments: 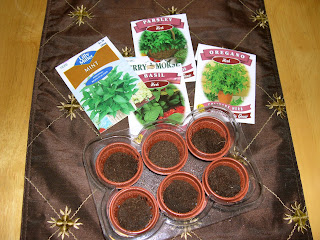 Yesterday I visited my local Do It Center and picked up an herb growing kit made by Ferry-Morse, with these cute little pots. This is something I've been wanting to do for a while and because of laundry, a two year old, t.v. shows, dinner duties (and lunch and breakfast), nail biting, and many other nobel distractions, have put it off until now. 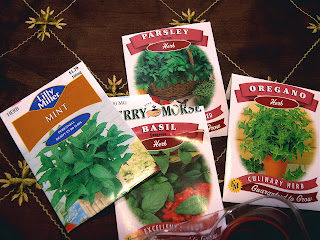 The kit included basil, oregano, and parsley and I purchased a packet of mint because I couldn't have an herb garden with the tasty and aromatic mint! 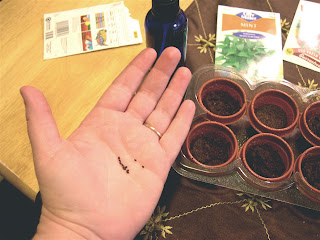 Anders had fun watching me put the seeds in the dirt and even sprinkled a few himself. 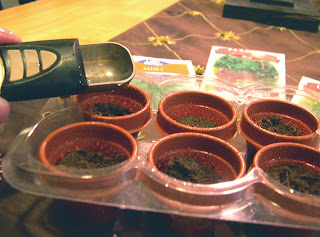 Now let's just hope they sprout! If not we'll try the experiment all over again so that I can revel in fresh herbs!
Posted by Gretchen at 3:13 PM 6 comments:

As I re-did my blog I began thinking about Christmas and what it means to us.  I've been reading Luke and in Chapter 1 verse 67 an old man named Simeon rejoiced when he saw the baby Jesus and said,
"Sovereign Lord, as you have promised, you now dismiss your servant in peace. For my eyes have seen your salvation, which you have prepared in the sight of all people, A light for the revelation to the Gentiles and for the glory to your people Israel."
The Holy Spirit had come to Simeon and promised that he would not die before he had seen the Lord's Christ the Messiah. What a remarkable day for this man to see the promised Messiah!
It's amazing to me that not everyone would know the power of this moment in history (They soon will!). To many people the story doesn't pack the same punch as it should. This little baby would become the last sacrifice. The lamb that was slain for the forgiveness of our sins.  The whole purpose of Jesus coming to earth as a baby, was to not only experience what we as humans go through but to be the perfect sacrifice that was needed to heal the relationship between God and man.
This is good news!
Posted by Gretchen at 3:48 PM 3 comments: 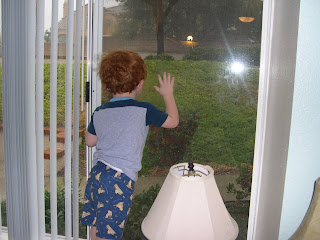 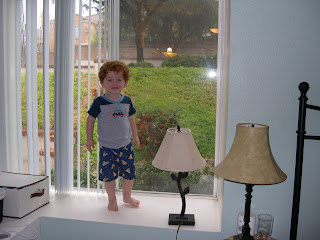 This is our first real rainy day of the season. Anders likes to climb up on the window seat and watch it pour.  According to Chris this is just a light rainy day in Cincinnati!
Posted by Gretchen at 10:58 AM 1 comment: 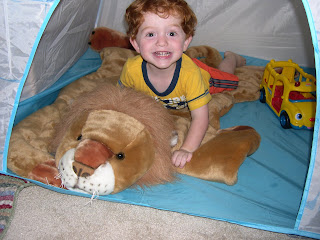 Since this blog also is used for documenting Anders life I had to sit down and think about what he has been doing lately and what I want to remember when this stage has passed.
In the last couple of weeks, I've been giving him a bit more freedom to ride his tricycle up and down the walkway in front of our door while I'm cleaning or cooking dinner. I can see him and hear him and I leave the front door wide open. I've set some boundaries as to where he is allowed to go etc.... next to the path is a little hill with ground cover plants on it. There are usually swarms of happy bees pollinating the flowers on this hill. But in the late afternoon they've gone back to their hives and there aren't any bees on the hill. So, a couple of days ago Anders was hitting golf balls around and he happened to hit one up the hill into the foliage. I was watching this from inside and I saw him contemplate going up and then looking back to see if I was going to shout some directions to him.
He wanted the ball but was unsure about entering unknown territory especially with all of my strict guidelines about where he could and couldn't go. He didn't see me so he started doing something else. I thought about how I want him to be a bit adventurous and how good it is for little boys to feel like they accomplished something dangerous, so I wandered out and suggested that he go up the hill and get the ball. I climbed halfway up and then spotted him as he climbed up. I could tell that he was trilled to be able to do something kind of adventurous and to step in all of those plants! It's a steep little hill so of course I told him to come and get me when he has to get another golf ball so I can watch him. The rest of the afternoon he was hitting "slap shot" balls up the hill. Eventually the tricycle was re-discovered and I could get back to vacuuming.
Here are a few funny words or phrases that I have to document for my own purposes.
Honey dew melon - "blum blum"
Blueberries are still "baboos"
Milk is "mulk"
Water is "wawa'
He says "lovely", "darn", "shoot" "poo poo cow", and "oh noooo baaaad!" about anything off kilter.
Lately before bed he starts demanding "wii time! wii time!!" He is a good audience and cheers us on. If we are playing Tennis he'll yell "love!" or "deuce!" And golf gets the cheer of "birdie!!". He always claps for us as well. We're trying to teach him but it hasn't quite caught on yet.
Tonight I was looking for a dvd of a fireplace that we like to break out around Christmas (sad apartment living). I couldn't find it but Anders would go over to the various places we keep dvd's or cd's and with much enthusiasm say "Flower place, Ohhhh found it! Wow...... hmmmmm nooo". I guess that's what I sound like when I'm looking for things!
The fun of being two has brought on new words like "lettgo!" and "no mine!". my favorite is saying "share" while clutching the item tightly to his chest and glaring at the poor person he doesn't want to share with.
Our friends have nine kids and Charlie who is one, is the youngest. She and Anders have a special relationship where they are either hugging or fighting. I hear a lot of "Chalie, noooo hit mmm push noooo." We are really working on being nice to our friends, sharing, not pushing or hitting or kicking. This really is a fun age.....
Chris and I are getting  a lot of cuddles which is VERY pleasant. Anders likes to be read to while snuggling up on the couch next to either of us. He likes being "cozy" and playing rough. He likes to be all together on the weekends and prefers for both Chris and I to put him down to bed. He asks for "desus" (Jesus loves me), "tar" (twinkle twinkle little star) and "b" (abc song). One night he asked for "moon" song so Chris and I started singing "moon moon moon moon, moon moon moon moon" starting out slow and then getting progressively faster. It's not a classic yet but he still asks for it.
We love our little red head!
Posted by Gretchen at 9:44 PM 2 comments: 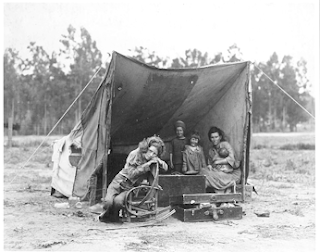 Here is an interesting article I found while googling "tips from living through the Great Depression".
I was talking to my mom this afternoon about frugality and my Grandpa's mom (Edna Seelye). She and her sister Anna Bell were so careful and frugal and creative at the same time. They made it through the Depression and seemed to thrive while doing it.  They created beautiful things around themselves and knew how to make a lovely meal (always with some kind of dessert) on very little.
I personally am a person of excess. I have never liked or looked for the challenge of making something out of nothing. I don't like crafts or sewing very much and in makes me squirm when I have to make a budget. Of course that has changed a bit over time because a budget is a neccessity and now that I am no longer a free wheeling single gal I have come to understand a little better the value of money. I learn most everything the hard way and money issues are no exception.
But.....there is a part of me that really likes an adventure. Even if it's uncomfortable it's something new. I like "something" to be happening. It gives me a thrill to move, change jobs, start projects learn a new skill etc.... I also have a deeply buried desire to survive.... to work for what I eat and live on. It quickens my spirit to scramble a bit, to feel like I need to pull off something important, like daily living.
Lately Chris and I have been discussing different options for our finances. One of the options was for me to work a bit and try and pull in some extra cash. I am now working on Saturdays cutting hair.  The other option is to sell one of our cars. It would eliminate a car payment and it would enable us to put some money towards some unwanted debt. This plan is still in the works but the more we think about it the better it sounds. As good as it sounds I realize that it would be inconvenient(said in a sing songy drama voice).... I am not very used to inconvenience.
I figure that it will be a good opportunity to nurture my deeply buried survivalist instincts and maybe awaken a bit more creativity.
hmmm maybe I'll hide some chickens on our patio and start weaving tunic style dresses out of hemp....
Posted by Gretchen at 10:11 PM 7 comments:

For any of the women that may read my blog, I just stared a new "beauty blog" where I review products and discuss beauty related topics.  The address is ggbeautyblog.blogspot.com.
I have always been a product junkie and so I figured that I could put all of this expensive knowledge in one place and maybe help someone else find just the right thing!
Posted by Gretchen at 7:59 PM 7 comments:

Gretchen
Hi! Come on in! I am a wife, mom, daughter, sister and friend. On this blog I talk about mothering, cooking, my boys (I have three), health, the weather, and whatever else pops into my head! I was a hairstylist for 15 years but have stepped back from that career to raise my guys and focus on writing. I work hard at planning and cooking meals at home but sometimes Little Caesar's wins. I am naturally a "messy" but am always trying to be a "neat-y". I value people and am an extravert although I love the occasional night to myself with no one around me. I have been known to dance a small jig when I have the house to myself. As a mom, I am in a work in progress. I make more mistakes than I care to admit but I pray that God will sort it all out in the end and help me keep it together along the way. I'm a big fan of alternative remedies and will try anything natural that may help my kiddos get and stay healthy. Although I gotta love my pediatrician! Thank you for stopping by!